The Desmond files...Desmond runs this show!

The sun is shining.  Still cold out there though, temperature around the freezing mark.  Desmond is taking in the sun while keeping look out of his back yard.   This is his spot.  Eat. Clean self off.   Take watch.  Take a stroll in the hood.  Will be back later... 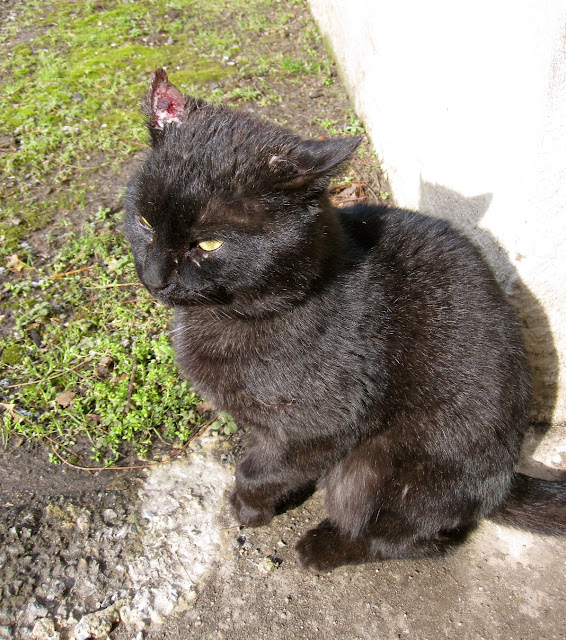 Desmond came home a few days ago with a mangled ear.  Hard to say what he got into this time.  His ear was healing up, but he just keeps rubbing it raw.  I try to clean it out for him.  Sometimes he is cool with me doing that. Last time I tried, he put up a fuss and went in his shelter.  Definitely had the "don't touch me" face on that last time.  I'll try again later.

A few nights ago, I was woken up around 2 am hearing growling.  Immediately, I thought it was Chauncey growling at Frankie.  Nope, both cats were sleeping in bed.  I jumped out of bed to look out the window and saw a cat.  A cat I have yet seen around here.  This cat was right outside my door where Desmond's shelter is.  A cat challenging Desmond, what the what?  Clearly this cat doesn't know of Desmond.  Desmond must not have felt to threatened, he just stayed in his shelter while this other cat growled up a storm.  Or, it was just too damn cold out to move from a warm spot.   I opened the door, unknown cat ran off.  I was done with hearing cats growling at 2 in the morning.  Just another cat trying to move in Desmond's territory.   This has happened before.  Still, with an injured leg slowly getting better, Desmond runs the show.  I swear, Desmond is like a ninja out there in the back yard.  I've seen him slither through the grass and disappear in the shadows while stalking another cat.  He is one smooth cat and will also let it be known that he is the champion alley cat.    Hey, I've seen neighbors walk their dogs by.  Their dogs do a double take at Desmond with a face of "oh snap, not that cat!"

Oh yeah, Desmond loves to rub up against my leg looking for attention.   He let's his guard down occasionally.
Email ThisBlogThis!Share to TwitterShare to FacebookShare to Pinterest
Labels: desmond
Newer Post Older Post Home